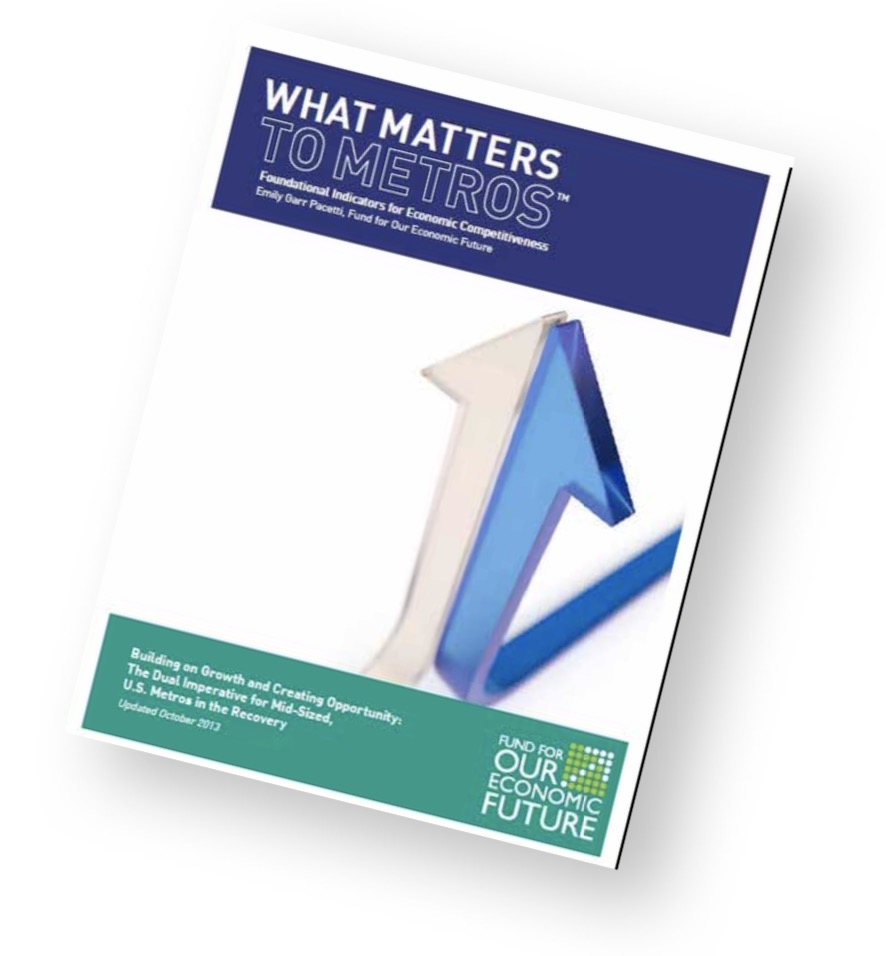 Our flagship What Matters research series (formerly called The Dashboard of Economic Indicators) provides deep data analysis to help our region identify critical issues associated with economic vibrancy, to promote strategies that increase growth and opportunity, and to empower diverse stakeholders and communities to work as well-coordinated networks to implement those strategies.

Released in 2013, the most recent report in this series, What Matters to Metros: Foundational Indicators for Economic Competitiveness, evaluates the economic performance of 115 metropolitan statistical areas between 1990 and 2011, and sheds light on the factors most critical to advancing growth in a post-recession economy. The work assesses the relationship of 55 variables to economic growth across four measures: per capita income, gross metropolitan product (GMP), productivity and employment.

What Matters to Metros reinforces much of what we already know; specifically, that education and innovation are the bedrock of a healthy economy. But the research also presents surprising results that challenge many of our assumptions. Most noticeably, it suggests that metro areas with the most job growth tended to have the highest poverty, crime and income inequality, which will ultimately put that growth at risk. This disturbing trend makes it clear that a strong economy is defined not just by its growth, but also by how it grows.

Economic growth must be accompanied by an increase in access to economic opportunity for historically isolated and disconnected populations, particularly those without the educational attainment or career readiness demanded by the marketplace and those cut off from job opportunities by unsustainable development patterns. Advocates for economic growth and advocates for increased opportunity need to join together and align their respective efforts to strengthen key industries, prepare talent for success, and connect and strengthen quality places.

A complete, sortable data set is available upon request.

PAST WHAT MATTERS RESEARCH INCLUDES:

Key observations from the report include:

THE CRITICALITY OF EDUCATION AND INNOVATION.

Together, higher education and innovation are associated with per capita income, productivity and GMP growth.The factor is neither positively nor negatively associated with job growth.

THE RISK OF JOB CREATION WITHOUT INCOME GENERATION.

Many metros that experienced high levels of employment growth did not see these jobs translate into higher per capita income; in fact, inequality, poverty and crime tended to be more prevalent in those metro areas that saw the most job gains.

THE BENEFITS OF DIVERSE ENTREPRENEURIAL ECOSYSTEMS.

Business starts and/or self-employment are associated with every measure of growth: jobs, income, productivity and GMP, and are especially pronounced in metro areas with more diverse and integrated populations.