By Barbara Ray and Sarah Jackson

In 2011, the suburbs of Cleveland were profiled in a New York Times story about growing suburban poverty in the United States. The story documented places such as Parma Heights and Warrensville Heights, once known for their “good schools, manicured lawns and middle-class neighbors.” Those neighborhoods today are grappling with something new, growing poverty.

In 2000, 46 percent of the metro area’s poor were suburban residents. By 2012, 56 percent were. As the Times documents, once middle-class communities now have long lines at local food banks, and municipal governments struggle to help poor residents on tight, post-recession budgets.

It was only in 2011 that the Northeast Ohio region saw its first full year of job growth since the Great Recession. The region, with a population of more than 4 million, encompasses four metro areas (Akron, Canton, Cleveland, and Youngstown) and includes nearly $200 billion in economic activity. The area was lauded by Brookings’ Bruce Katz and Jennifer Bradley in their book “The Metropolitan Revolution” for its work to bring jobs in high tech and advanced manufacturing to the area through a partnership between the region’s Fund for Our Economic Future and the Brookings-Rockefeller Project on State and Metropolitan Innovation.

Yet the region’s economy isn’t reviving for everyone. The challenge for metropolitan Cleveland–and the Northeast Ohio region more broadly–will be to ensure that everyone is connected to economic opportunity regardless of ZIP code, skill level, or income status.

“Northeast Ohio is, in fact, in a recovery, but it is slow,” Emily Garr Pacetti, who directs research at the Fund for Our Economic Future, told us. “As we begin to grow jobs again, research tells us we need to pay attention to the quality of those jobs, where they are and who is getting them just as much–if not more so–than the jobs number itself.” In Northeast Ohio specifically, more than 200,000 residents live in low-income neighborhoods where less than 65 percent of the working-age population (25-64) are connected to the workforce.  Although many of these residents are concentrated in larger cities, many are not.  These residents are spread across 10 counties and over 40 municipalities.

Source: The Fund for Our Economic Future

Source: The Fund for Our Economic Future

There is, she says, a “surprising disconnect between job growth and income gains that challenges this region and many others to look at growth more sustainably than in the past.” The Fund’s 2013 study, “What Matters to Metros,” assessed 115 midsized metro areas, finding that those that experienced some of the fastest job growth between 1990 and 2011 tended to have higher income inequality, crime, and poverty following the recession. In other words, a “job” didn’t always lead to income growth, with many residents either stuck in low-paying jobs or lacking access to opportunities to advance up the income ladder.

As Manuel Pastor and Chris Benner stress in their recent book, “Just Growth: Inclusion and Prosperity in America’s Metropolitan Regions,” job growth alone is not enough. They too find ample examples of regional and metropolitan economies experiencing rapid economic growth but also rapid polarization and inequality. They argue that more than just growth, we need “just” growth that allows for broader access to education, training, and capital. Their research shows that economies that focus on equity-driven growth can be more productive in the long run.

In a follow-up publication from the Fund for Our Economic Future, Garr Pacetti argues likewise that collaborative, and, importantly, regional approaches can better help connect growth and opportunity for residents. This approach, Garr Pacetti argues, is a significant shift in how communities work together to design and align their economic and community development strategies, and to strengthen connections between where people work and live.

One example of a well-aligned, collaborative approach is workforce development. The Fund has invested more than $2 million over four years to support WorkAdvance, which uses an integrated workforce development model to help unemployed and low-wage workers find quality jobs in targeted sectors that have room for advancement within established career pathways. In Northeast Ohio, the program is serving employers in health care and manufacturing in and around Cleveland and Youngstown metro areas.

Rather than taking a mishmash of community college courses or retraining for a job that won’t exist in three years, Ohioans can train for jobs that match local employer needs. For example, hospitality employers in the region have helped design a customized class for those interested in the field, combined with a four-week, on-the-job training experience. A recent evaluation by Public/Private Ventures of similar programs found strong evidence that these approaches increased earnings and resulted in more consistent employment.

The Fund for Our Economic Future is working collaboratively in other ways as well. The Fund today includes private, community, and corporate foundations; higher education institutions; health care systems; corporations; and individuals.

Without broader collaboration like this, suburbs such as Parma Heights or Warrensville Heights risk falling farther behind as their residents struggle to make ends meet. A go-it-alone strategy—with each municipality devising its own plans, battling for a shrinking pot of funding, and creating islands of success—will not promote the sustained growth the region needs. Instead, the work of the Fund and others can help to ensure that struggling communities, including suburban Cleveland, can continue to work their way out of the recession in a way that lifts all boats. 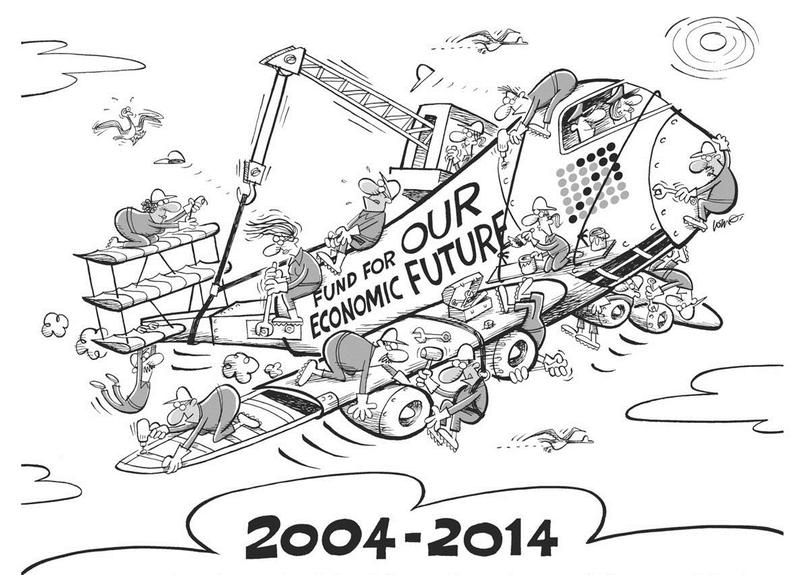 Opportunity Corridor: By the Numbers